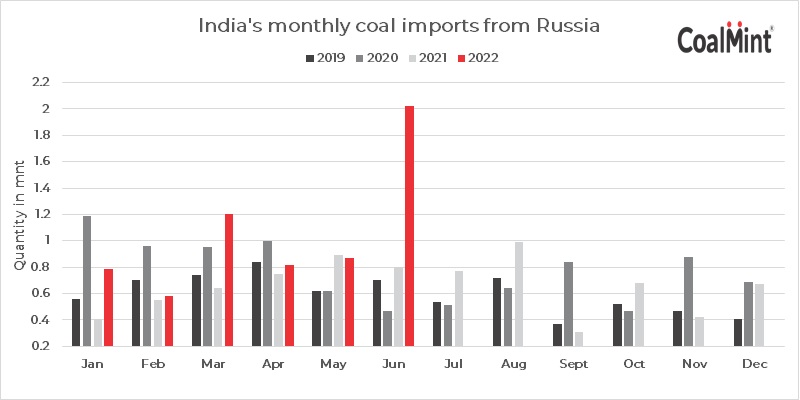 The Russia-Ukraine conflict that commenced in end-February, 2022 has been altering coal trade dynamics in more ways than one. India, whose coal imports from Russia rarely touched the 1 million tonne (mnt) mark in the past, imported about 2.02 mnt of coal from Russia in June.

The reason, of course, was that Russian coal was available at discounted rates to India buyers after the USA, EU and Asian countries such as South Korea, Japan and Taiwan slapped sanctions on Russia.

An analysis of the buying pattern of thermal coal shows that the power and cement sectors accounted for the majority of imports. India hardly imported thermal coal from Russia previously as evidenced by data gathered in previous years, with the highest imports standing at 0.87 mnt in January, 2020.

According to market participants, Russian coal is suitable for the cement and power sectors in India given its high GCV and low sulphur content. With thermal coal prices from Indonesia, Australia and South Africa trending at very high levels, cheaper Russian coal provides cost benefit to Indian users.

Australian coking coal prices, trending at an average of $400/t on FOB basis in June, have pushed a select few Indian steel mills to opt for Russian coal, which is available at just half the price compared to Australian material. However, Indian steel major Tata Steel has shunned imports from Russia due to the war and thus no vessels for the company arrived from that country in June.

India has been a regular buyer of Russian PCI coal and its monthly average in 2021 stood at 0.22 mnt, whereas in January-May 2022 imports stood at 0.46 mnt; about 0.45 mnt of PCI is expected to be imported in June. The top buyer in June is JSW Steel followed by JSL, Rawmet and AM/NS India.

Like PCI coal, India imported anthracite coal from Russia in the past but in small quantities, with the monthly average standing at around 0.10-0.12 mnt. But June has recorded the highest imports thus far of 0.21 mnt from Russia amid low prices. Rawmet and Carbon Resources were the top buyers of Russian anthracite coal during the month.

CoalMint vessel data shows that Russian coal imports will be around 0.52 mnt between 1-12 July. While the next quarter may see a decline in imports due to bearish sentiments in the steel and cement sectors during the monsoon, after the rainy season the share of Russian shipments in India’s total coal imports is likely to rise.

Learn more from the experts at India Coal Outlook Conference 2022 on 3-4 Aug, at The Lalit, New Delhi (India).