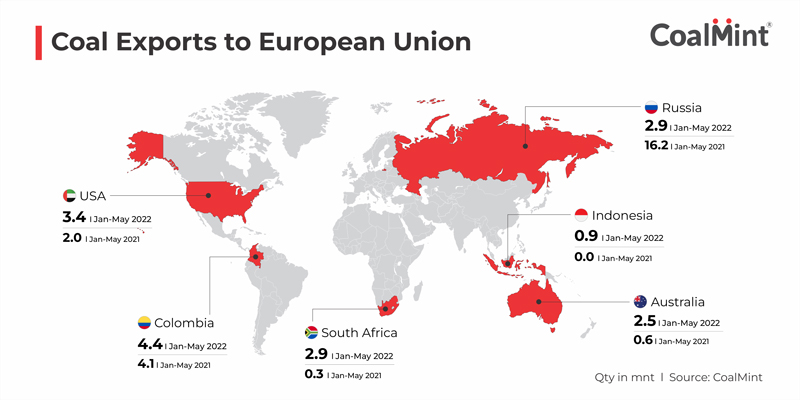 Amid concerns surrounding Russian gas supplies post-the August sanctions, several parts of Europe have been relying upon coal-fired power generation as the only viable option.

Germany, Austria, Poland, the Netherlands, and Greece are among the first European nations to have reopened coal-powered plants in a bid to secure energy supply in the upcoming winter.

The use of coal attains higher significance at a time Russian energy firm Gazprom announced plans to cut down 60% of its LNG flow via the Nord Stream 1 pipeline to Germany recently.

European countries are now looking at ways to replace the LNG supply gap with alternate sources, mainly coal.
Coal demand in Europe is likely to remain higher going ahead as it gears up for the 10 August deadline to implement a complete ban on Russian energy imports.

Europe has emerged as a major export destination for coal by countries such as Australia, South Africa, the US, and Indonesia owing to its strong demand for high-CV coal, prices of which have remained sharply higher since last year amid limited supply.

As per data compiled by CoalMint, exports by six major countries – Australia, Colombia, Russia, the US, South Africa, and Indonesia – have risen to 17 mnt during January-May, 2022 as against 23.24 mnt during the same period last year.

As per the data, the decline in total exports is evident from the gap in shipments from Russia this year. However, the extent of demand is being observed from the hefty rise in imports from Australia, South Africa, and USA so far this year.

So far, Germany and Austria have announced an emergency restart of coal-powered stations. Germany’s capital Berlin has been working on a new law to temporarily bring back up to 10 gigawatts (GW) of idled coal-fired power plants for up to two years, which would account for just under 5% of total German production capacity.

Austria, which depends on Russia for 80% of its LNG imports, is also set to restart the Merrach coal plant which was shut down in 2020.

The Netherlands, on the other hand, has activated the “early warning” phase of an energy crisis plan by lifting restrictions on generation from coal-fired power stations to 2024, making the power stations run at full capacity as against the previous maximum of 35%.

Other EU countries, including Italy, are expected to start up their old coal-fuelled power stations too as the energy crisis worsens.

To know more about the key drivers in the coal economy join us at India Coal Outlook Conference. CoalMint will be hosting the India Coal Outlook Conference on 3-4 August 2022 at The Lalit, New Delhi, to discuss the key issues pertaining to domestic coal production and supply, the government’s objective of controlling imports and domestic supply gap affecting many industries, the need to increase the purchasing power of Indian steel companies in the volatile global coking coal market as well as issues related to decarbonization of the coal value chain.