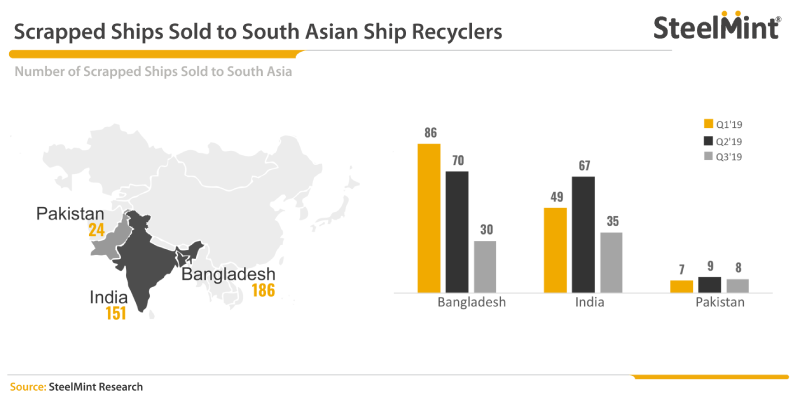 Bangladesh is one of the largest ship-breaking and recycling hubs in the world, which forms an important source of ferrous scrap to the country’s increasingly scrap-dependent steel industry. Bangladesh is on a course of surpassing India to become the country with the largest number of used ships imported in CY 2019.

However in Q3’2019, the country witnessed a sudden slump in its imports of scrapped ships.

The major reasons attributed to the sharp fall in vessel import numbers in Q3 are the new taxes imposed in Bangladesh’s annual budget implemented from July’19, as well as the oversupply in the surplus imports in the preceding quarters. An additional VAT at a specific rate of BDT 1000/Tonne was imposed on import of scrap ships after the implementation of the budget, a change from the initial proposal of the budget in Jun’19, which had  proposed a 5% VAT on the value.

In anticipation of the tax alterations in this year’s budget, most of the ship-breaking yards in the country had booked scrap vessels in excess, in the preceding Q1 and Q2’19. The surplus scrapped ships after being processed created an oversupply in the local scrap market of Chittagong which lasted for around 3-4 months, thus discouraging recyclers from importing further vessels, amid huge quantities of unsold inventories of scrap.

The said over supply in the market also pulled down the ship yard scrap prices in the domestic market, with offers for local ship yard scrap, falling from BDT 37,000/MT to 29,000/MT ex Chittagong, within a span of just 3 months in the quarter.

The severely weakened demand for import of scrapped vessels from a major buyer like Bangladesh led to a continuous fall in its prices, with the offers for Tanker vessels sharply declining from USD 420/LDT CFR Chittagong in the beginning of Q3’19 to around USD 370/LDT CFR by Sep’19. 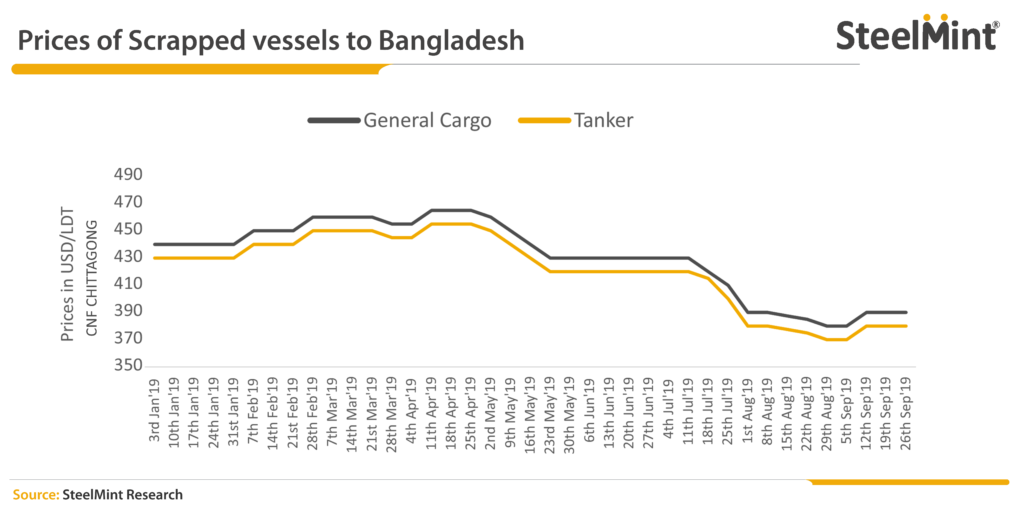 In 2018 (Jan-Sep’18) Bangladesh had lagged behind India with 124 scrap vessels being imported during this period, as compared to 195 vessels imported by India. However, even with a significantly lesser number of vessels imported, Bangladesh had surpassed India in terms of total volume of scrapped ships imported, as the country’s volume for imports of scrapped vessels stood at 1.79 Million LDT in Jan-Sep’18, as against 1.46 Million LDT for India, thus indication that Bangladesh imported larger scrapped vessels on an average for recycling.

To know more about ship recycling industry in Bangladesh book your seat at SteelMint’s 3rd Steel and Raw Material Conference, Bangladesh and get a chance to hear views of renowned industry participants from across the globe. The conference is being organized on 23rd-24th March 2020 in Chittagong, Bangladesh. 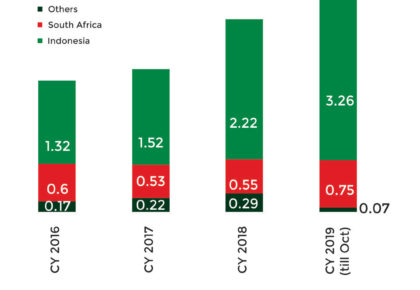