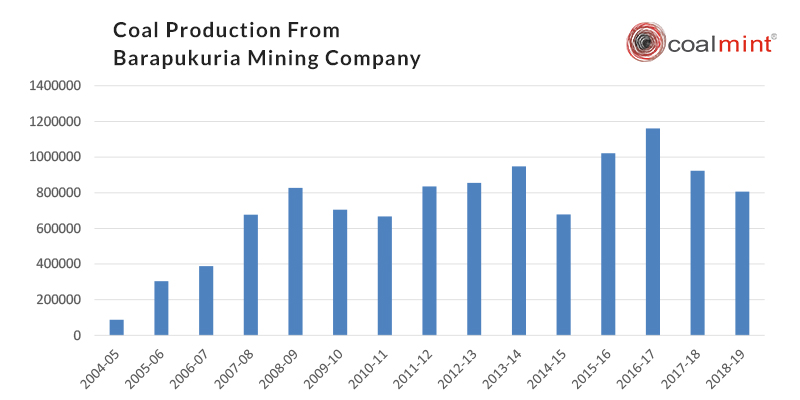 Barapukuria Coal Mining Company (BCMCL), operator of the first and sole coal mine of Bangladesh, has reported a decrease of 13% in annual coal production during FY19. The company recorded 805,695.63 MT coal output in FY19 as against 923,276.08 MT in FY18, thus attaining its lowest total in past 4 fiscals.

Primarily envisaged to cater the coal requirement of thermal plant set up by Bangladesh Power Development Board (BPDB), Barapukuria coal was also sold to local buyers at approved price by the board keeping consistency with the international market.

However, in order to augment coal supplies to the thermal plant, Bangladeshi government has ceased selling of Barakupuria coal to local buyers since 19 Mar’18.

The gradual affect of the decision resulted in a 5% increase in coal supplies to BPDB’s plant to 828,736.77 MT in FY19, while sale to local industries was merely reduced to 894.19 MT in FY19 as against 274,144.79 MT in FY18, because no supplies were made to them ever since the official order was inflicted.

At the same time, non-power sector of the country were compelled to cater their coal demand from the overseas market, which had brought significant amount of coal via imports in the period.

Up till now, BCMCL has fallen short to meet the rising coal demand in Bangladesh amid limited resources; however, it had claimed that its role would be pivotal in national economy by ensuring that the country saves huge foreign currency on coal imports.

Let us take a look on the short comes and future plans of BCMCL which it would be executing in the coming years.

The coal deposit at Barapukuria in Dinajpur was found by the Geological Survey of Bangladesh (GSB) in 1985. After undertaking various feasibility studies on the coal site the government had decided to set up the coal mine.

Upon completion of the development of mine work, BCMCL started commercial seamless production from the mine on 10 Sep’05. Since then, a total quantity of 10,969,690.455 MT has been procured from the mine up to FY19.

BCMCL has stated that it had faced uphill task to extract coal from underground in an environment friendly manner, which was highly laborious and difficult. The company has faced continuous challenges for coal extraction such as roof fall, coal bump, water inrush, spontaneous combustion, high temperature and humidity etc.

At present, BCMCL is mining coal from the third slice of central part of Barapukuria coal basin, which has been reported a highly risky job from safety point of view.

Apparently, it was the root cause for the decline in coal output seen during FY19, as all precautionary measures had to be taken to mitigate the risk and ensure safety at the mine.

BCMCL has completed the feasibility study work for extension of the central part of the Barakupuria mine towards the north-south section.

The recommendation of the study project reports have suggested that suggests that 3.8 MnT coal could be extracted from Northern part for 6 years and 6.9 MnT from Southern part for 7 years, for which all necessary measures are under process to extract coal from that extended mining area.

At present natural gas is the main indigenous energy source of Bangladesh that accounts 54% of the total electricity generation. But depletion of natural gas resources provides an uncertainty over its sustainable supply over a long time.

Therefore, the Bangladeshi government is taking prudent decision to diversify the primary energy sources in the form of coal reserves.

Apart from expansion of North-South extension part of Barapukuria Coal Mine, the government has also taken suitable measures to extract coal from discovered coalfields at Dighipara, Jamalgonj, Fulbari and Khalaspir.

Different study reports have revealed that the quality standard of Bangladeshi coal is very good due to its high calorific value and low sulfur content. The astute measures taken to extract coal from these projects would apparently play an important role in meeting up the ever increasing demand of coal.